Some Thoughts on the Nature and Purposes of Freemasonry

SOME THOUGHTS ON THE NATURE AND PURPOSES OF FREEMASONRY
by Ill. Albert Pike, 33° 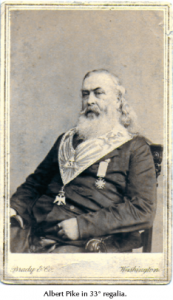 It is very desirable that Freemasons should understand what Freemasonry is. If it were everything at once that even its Initiates imagine it to be, it would be difficult to conceive of anything more intrinsically incongruous. It is not a merely benevolent association, for the mutual relief and assistance, and the dispensing of small charities to the needy. It is not a society for mutual admiration, got up in order to gratify the ambition or the vanity of those who are fond of office, insignia and jewels, of the glories of resonant epithets, and the gauds of high-sounding titles.

It is not a system of political clubs or organizations, conservative, radical or revolutionary.

It is neither a religious or irreligious Order or Church, propagating any faith or unfaith whatever. Its altars are neither Hebraic, Mohammedan nor Christian, but simply Masonic.

It is not the apostle of any particular form of government, not the advocate of any peculiar political faith.

It is the Apostle, the Preacher, the Advocate of Truth alone, and not as the creed of any man, or party, or multitude of men. It will not descend from the high places on which it sits enthroned, to engage in controversies and polemics, to become the organ of a party, an agent to effect political changes, or a schoolmaster to teach rudimentary lessons or a particular class of political, governmental, or economical ideas.

If wisely conceived and carefully expressed, all these may be applications of Masonry; but they are not Masonry itself…

Freemasonry is advancement towards the Light, on all the lines of progress, moral intellectual and spiritual…

If Masonry were merely an association of persons, united for mutual assistance and protection, its aims would no doubt be laudable; it would perhaps be strong in numbers; and it might thrive for many years. But if that had been its whole purpose, it would never have been enabled to measure the term of its existence by centuries, and when it had grown so old as to have forgotten its own origin and the names of its founders, to continue as hale and vigorous as ever. Nor would the possession of its antique secrets, stirring the curiosity of men, and drawing them with a force irresistible towards its Temples, have given it that perpetuity and perennial youth.

It outlasts the ages, because its aims are higher and nobler than the mere communication of mysterious secrets, or the affording of mutual and reciprocal assistance.

It requires of its initiates that they shall be useful to society. It desires to be itself a benefactor of even the unborn generations; that its influences, the consequences of its teachings, of its toils and its charities, may flow, ever broadening and deepening, far down into the remote Future.

It teaches those who frequent its Temples, that the nobility of human nature is displayed in WORK; that it is the destiny of every one to LABOUR; and that out of WORK alone, earnest and faithful, comes the blessing of man’s days; that Life is a battle, in which we are bravely to fight, and in which no craven spirit can succeed; that rest is a blessing that can only be purchased with victory over temptation, difficulty, and our passion; after which conquest alone we can repose our shields…

That law was enacted for it, and that nature assigned it, when it first appeared, vigorous in its youth, at a period unknown to us, to shine with a steady and peaceful light upon the darkness of ancient ages.

The noblest, if not indeed the only noble use, to which we can devote our strength, our energies, our faculties, our intellect, is to labour for the benefit of others, to instruct, to guide, to enrich with physical comforts, and moral healthfulness and intellectual wealth, the less favoured of our race; not alone our children, friends, neighbors, but those remote from us and even unknown to us; separated from us even by wide spaces of time yet unelapsed; to be born hereafter; to people this earth when we have left it; to build their habitations and their cities, and the monuments of their ancestors, upon our unknown graves….

There are reforms that Masonry can help to initiate. Every Mason can hold the man dishonoured whose soul is tainted with a lie. He can refuse his vote and voice to every man, and his subscription to every journal that does not, strictly, and in the most minute particulars and details, adhere to the simple truth. For falsehood is a fouler disease than the leprosy; and when it becomes common, turns the very life-blood of the nation putrid in its arteries.

Every Mason can practice temperance, economy and frugality; and avoid in himself and his family that ostentatious luxury by which so many nations have fallen.

And every one can find some way in which to so something for his country, or at least for the community in which he lives, without the hope of fee or reward….

We invite you and all the Brethren to aid us in thus enlarging the borders and augmenting the splendours and increasing the usefulness of the Ancient and Accepted Rite. Let its Temples of Perfection, in all their modest and harmonious proportions, be reared everywhere in the Jurisdiction, and a numerous and ever-increasing Brotherhood gather around the Cubical Stone in each, and there devote themselves to the service of God, their Country and their Brethren! Let these real Masters’ Lodges be open to call good and true Masons; but let their gates be sternly closed against the narrow-minded and the sordid.

Let the Chapters of Rose Croix teach incessantly their holy doctrines, of LIBERTY, with order and subordination, EQUALITY in the presence of the law, and BROTHERHOOD, that demands of the children of a common father, love for each other, mutual assistance, forbearance and protection.

Let the Councils of Kadosh teach hatred of tyranny and resistance to tyrants; free Thought, free Conscience and free Speech.

And let us gather into these Bodies and into our Consistories the learned, the intellectual, the zealous and the unselfish of the Order; and thus array around our altars and under our banners, a gallant soldiery, ever ready to devote their lives to the service of their country, to maintain public order, to carry forward needed reforms, and in every emergency to maintain the honour and increase the glories of their Fatherland!

And may we all, in whatever great troubles may come upon the Country, amid whatever adversities may oppress her, so shape our course, so bear ourselves in every emergency, so decide among conflicting claims to duty, as becomes good men and Masons! Amen! So mote it be!